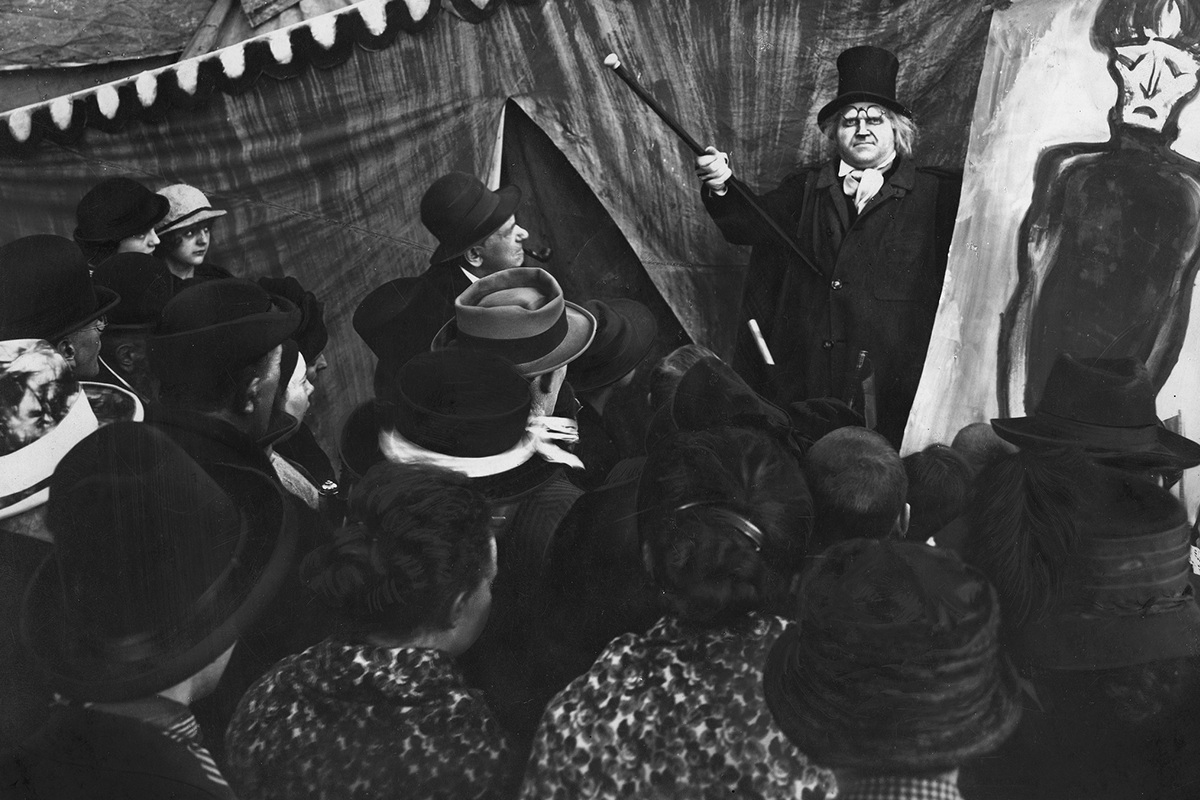 Robert Wiene’s film, Das cabinet des Dr. Caligari, has a fundamental historical and artistic value, being the first film in which the pictorial influences of the expressionism became vital aesthetics factor in the cinematography. This is not the only reason though, this film is still to be considered one of the most important in the history of the cinema.

Please be aware that this brief analysis may contain SPOILERS. If you’ve never seen this film, please come back after you did – as for most of the films, this is really not to be spoiled.

The end of the expressionism doesn’t correspond to its total oblivion – actually, many of its stylistic features were accepted, integrated and re-adapted internationally and ultimately will feed, especially in Hollywood, the genre called noir.

Amongst the peculiarities that are generally ascribed to the expressionist cinema one can find: the entertaining – but also twisted and uncanny – use that the directors make of the scenography; the use of particular set ups of lighting – unnatural – that makes the profilimico subject to distorsions. The perception of the film always result in a reality clearly disturbed even in the most objective components.

The compositions of this film are excellent: the backdrops that the artists Walter Reimann and Walter Röhrig had painted for it with lines and geometrical segments – with their own distortions – give back to the film both the feelings of energy and oppression. The staging of the acting is symptomatic: the characters, particularly Cesare, often walks as if glued to the backdrops.
The expressionist acting is coherently resolved in the close-ups, as well as in the longer fields – in which the characters, signalling their otherness (especially a chromatic ones with darks in opposition to lighter tones), manage to completely mess up the places where they are.

So, Das Cabinet des Dr. Caligari is the starting point and maybe also the end point of the research on the expressionism: the expressionist aesthetical mechanism seem to go, in this case, well beyond the layer of the staging and it violently touches the narrative structure as well. The “subjectiveness” of the vision, of the gaze, of the image and its distortions comes back with a renewed power.

It’s actually very interesting to note that during the course of the film a good number of questions come up about the effective origin of the narration: presented as a flashback account made by the protagonist (Francis), we soon realize that the flashback device is strongly subjective and therefore, all those that may seem objective memories, just distorted on a visual level, are actually only hypothesis and distorted visions about the facts. We are in front of hypothetical flashbacks, that signal that the narrative could be built around lies and the danger that is inherent in the de-realisation of the reality. In this way, the protagonist seems to be affected by some sort of psychotic delirium and the meta-reflection of the film gives it his modern character – not only its visuals.

“Dr. Caligari” could also be used as “director Caligari” (which is exactly the way the doctor is called) once we assume that the film is not just a psychotic delirium of Francis, but a diabolical machinerie made by the doctor. A director obsessed by his own researches and organizer of perfect stagings who uses means not necessarily legal. But here’s where this interpretation falls, because the highest degree of manipulation is on Francis’ side until the equation of the film comes into place: a balance in the narratives between his being crazy and the creation of a doctor who happens to be a bit crazy, too. This recall to a certain type of literature that very often combines the scientific progress and the possibility of the ethical evil, the monster, seems to indicate, more than a manoeuvre made by Francis only thanks to a displacement process (how is indeed possible that all the other people in the asylum have no memory of this?), the possibility that the delirium and the psychosis are traceable in both sides of the binary conflict that is gradually unfolding (Francis vs doctor).

It’s clear that “Das Cabinet des Dr. Caligari” is structured around the concept of paranoia: in fact, there’s nobody that can be sure, after watching the film, of what exactly happened and what’s the truth behind the phantasmal mise-en-scene of the film. We can’t be sure, and can only infer. It’s a paranoia that finds it’s firing point in the sensation that dormant consciousnesses (Cesare and in a larger sense the metaphor of the sleepwalkers) are easily impressionable and pushed to act in a bad way – without even realising it. Or, to be more clear, that a man, taken by his own fervour, oblivious of the thin ethical boundaries, could use the “impressionable” minds of the dormant consciousnesses in order to create death and devastation. Now, in the History, the risks that come from such an unbalance are unfortunately well know and, in this case, Francis, in his own delirium and paranoia, seems to have done nothing but perceiving a very thin danger that was nested in his own land: Germany, at the beginning of the 20s.

Just a few years later in Germany, a man that some of these dormant consciousnesses allowed to take power and checkmate humanity with his ideas to annihilate and destroy with planned attention was taking his first steps on the political scene.

Just like today, in 2015 (well, 2019, at this point), although the changes, the evolution (technological one in first line), the historical precedent and the explosion of an unbridled consumerism, the risk of a mass narcolepsy is paradoxically and shockingly still present and very actual. And it’s here, once more, exactly like for the style and visual character, that this film reveals that some of his modernity traits are still far from being overdue.
And maybe, we discover that Francis – in his “perceptive” madness – and R. Wiene – with his “expressionist” dream – have just shout out their own paranoia feelings with a grade of precision and objectivity that a film like this seem to have well hidden under the surface.

And you, yes, you! What do you think of this film? 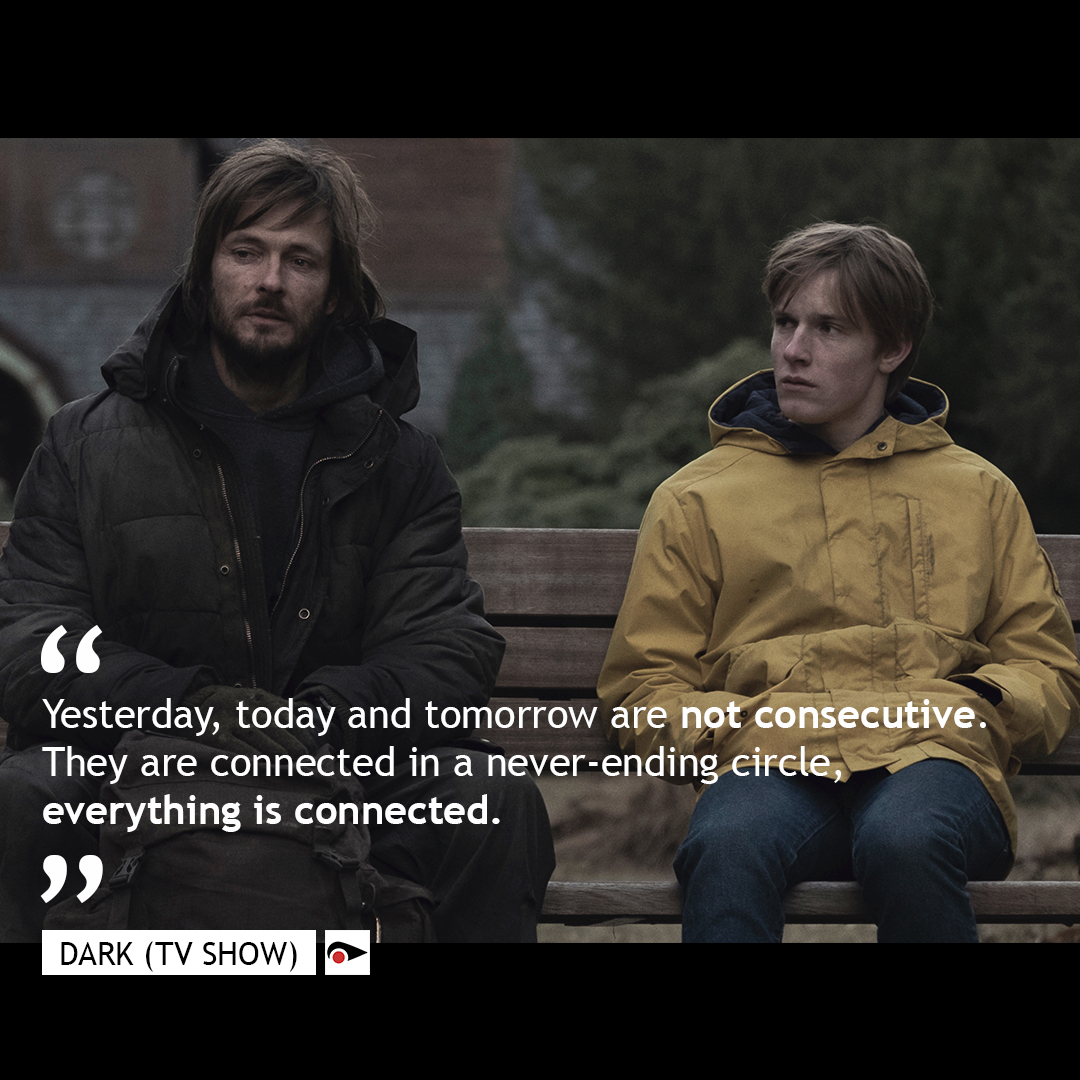