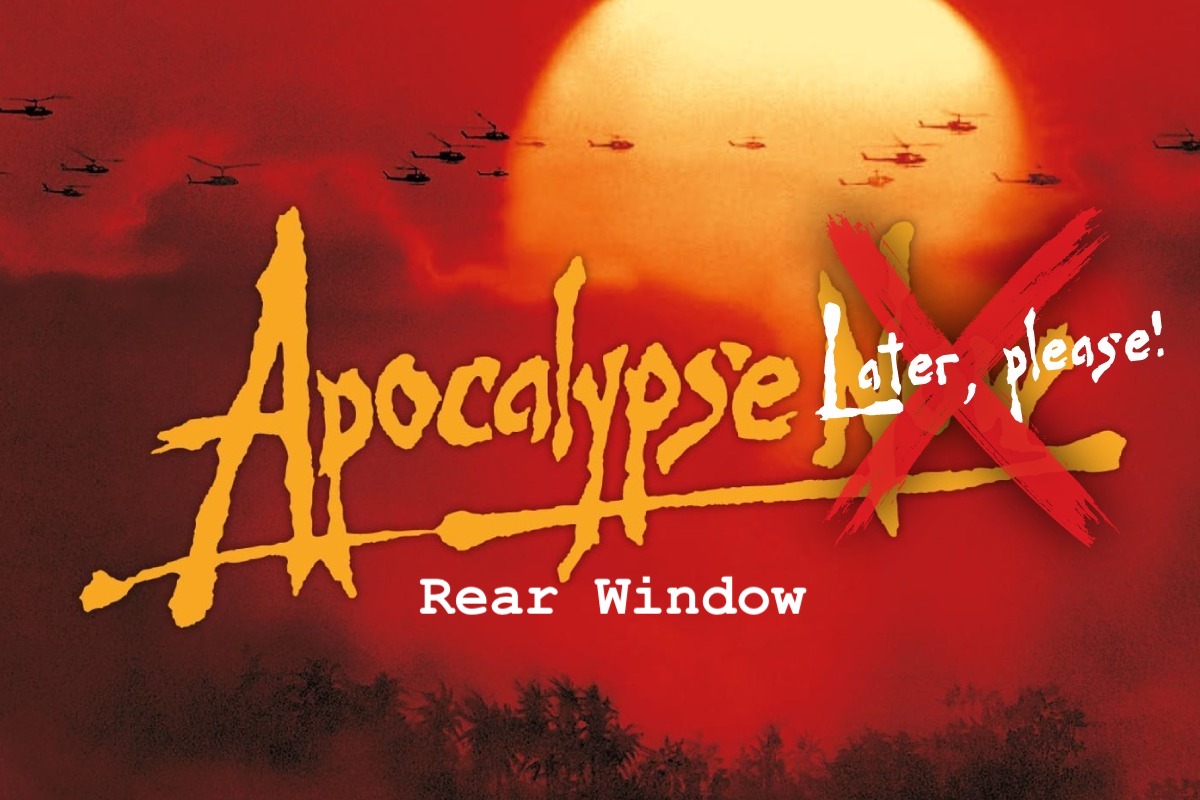 Apocalypse Later, please! is a section of this website that intends, in these peculiar and dramatic times, to offer a recommendation on films to watch when safely at home: today it’s “Rear Window“.

Introduction on this section.

JEFF: Would you fix me a sandwich, please?
STELLA: Yes, I will. And I’ll spread a little common sense on the bread.

Locked in, watching the others.

The film that we recommend today in our section Apocalypse Later, please! is Rear Window.

James Stewart – Jeff in the film – is forced to stay in his own house because of a broken leg in a cast. But Jeff [who’s a photographer and a creative person who usually travel around the world] is not a person who’s at ease in remaining locked in a place and he suffers for this situation [does this ring a bell?].
So, to fight the impulse of leaving the house – it’s impossible for him – he starts watching very carefully the neighbourhood from his rear window and he involves in this process Lisa as well – his companion [well, this is a very interesting plot-line].

His voyeurism brings him to the belief that one of his neighbour committed a murder: his surveillance on this person grows until he convinces himself that his reading is not just paranoid, but it’s the truth.

Is it though? Well, time to watch the film!

This film is a 1954 work by the master Alfred Hitchcock. It’s a film that uses all the characteristics of his cinema: a mix of suspense and humour is interwoven and then explode towards the ending. It’s an absolute masterpiece and one of those films that can’t be lacking from any of the lists of seen films.

Some analysis of this film are almost as interesting as the film itself: from the psychological study about voyeurism and its problems, to the metaphorisation of cinema and the optical devices within the film, all the analysis indicate this film as a milestone[1]. At the moment, on metacritic, this film has a score of 100/100. Not bad right?

Even the trailer winks at the metareflective character of the film. Here it is:

Rear Window problematizes Jeff’s condition – locked up in house – and it takes it to the extremes. This feeling is something that almost everyone can recognize these days. But this film seems extremely contemporary for other reasons as well.

Recently, the internet is teeming with videos about those idiots who transgress the rules currently in force and endanger the health of the whole community delaying the end of this situation. Beyond the simple and already expressed opinion on these imbeciles, one of the problems arising concerns the right of the people sharing this video to point out, record and share on the web the behaviour of someone who is or who isn’t adhering with the law.

In a time like this in which people can’t find an expression for their emotions and can’t find a way to let this and our creative instincts out, it becomes dangerous that people start identifying themselves as surveillant very attentive in controlling any movement that may seems suspicious within the neighbourhood.

Now, if local control mechanisms have always been a deterrent factor for suspicious behaviour, it is also true that the observation and the transformation of the observed behaviour into “a fact to be reported” (for a paranoid reading, for an interpretation resulted by boredom and the need of something exciting or just because we find unfair that someone is not respecting the law while we do) this is often a worrying and equally deviant sign [and not so young as a behaviour].

The responsibility for the forms of control of compliance with directives and laws should be left to the forces predisposed to do so because they are presumably prepared to recognize deviant attitudes with the greatest degree of objective observation that can be used.

If, as we said, it is true that the behaviour of many people delaying the end of this all is absolutely unjustifiable, there are some considerations that we would like to share regarding the activity of these self-declared “controllers”:
1) If the person who is thought to be deviant and shared on the web as so is, for instance, a homeless person?
2) If you go around with your dog and you meet a person who approaches you and some of these surveillant read this approach, in a paranoid way [always think that people have no outlet to their emotions and are inclined to create stories], as a deviant act (I don’t know, think about a drug trade…) and they share this on the web, what would you think?
3) Yeah, ok, I know you’re thinking: but I don’t sell drugs and I comply with the law. But are we sure that, seen from afar, none of our attitudes or acts could be misread? And if this would happen and one of us is put on the gridiron, the others – those who judge – would listen to the reasons or would refer to the prejudice that they might have formed watching the video?

All questions can all refer to one single point: who controls the ones who, without any training or investment, control?

Our society has set up a hierarchical structure that makes sure that there is always an additional degree of control, to understand if whoever does this job does it correctly (or not). This doesn’t always work in the right way, that’s true, but who gives people the right to take the place of this mechanism?

Do you need an example of how this has been harmful in the past? Run a simple Google search and look for some information on the witch hunt throughout the history and you will understand how dozens of women have been burnt alive for personal facts or for “disagreements” (this is a very polite word for some of the cases) with this person or another, without any form of verification on the reasons of the “complaint”.

It may sound simple to agree with someone who expresses their disgust for a behaviour like this, but often, the necessary context which allows one to be objective in the judgment towards such a dynamic is lacking.

In short, if Jeff is wrong or right in the film, in the real life and the context in which we live, this is relatively indifferent. What is important is the problematization of these events and the film gives us an idea of how these interpretations can be correct but also incorrect [case-by-case specific]. It would be better to turn on “a screen” on the rear window rather than putting yourself in front of a windod, phone in hand, waiting for the offender [or presumed offender] to do something wrong, to spit out the poison that we are slowly maturing in our bodies.

NOTE:
[1] If you’re interested to an analysis of this and other films, a very interesting book is: Thomas Elsaesser and Malte Hagener, Film Theory: An Introduction Through the Senses. 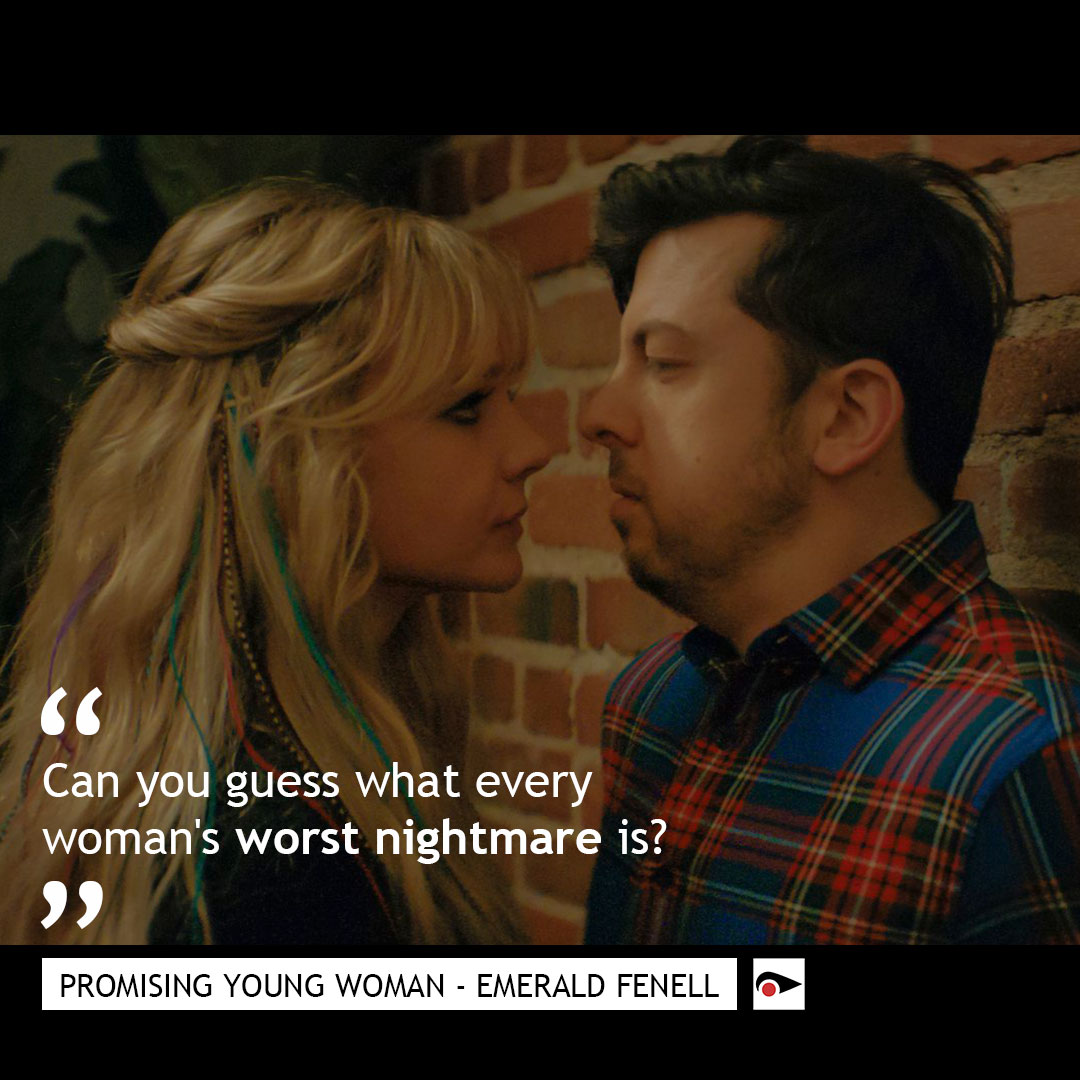